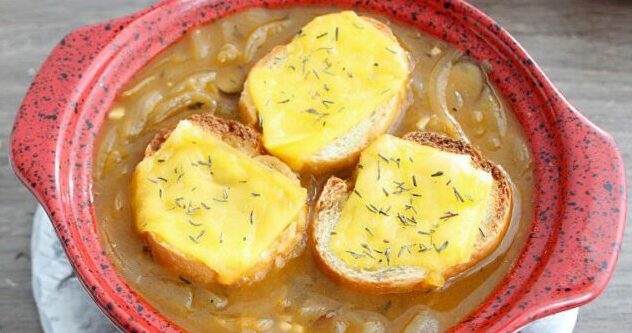 I am SO thrilled with how this recipe came out, the flavor is just ridiculous and my new favorite meal ever. You’ll love this vegan French onion soup!

It’s been years since I had a homemade French onion soup, but now that I can make it vegan and still create so much delicious flavor I am no longer missing out! I know you’ll love it too! 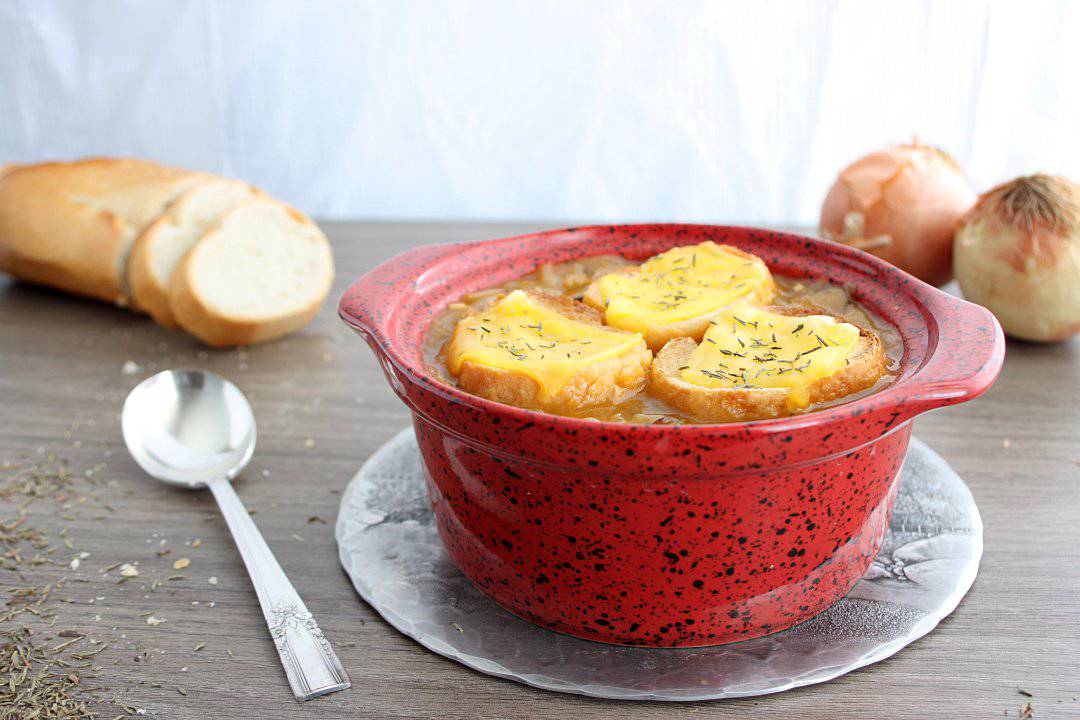 Since the ingredients for this soup are so basic and simple, I would HIGHLY recommend purchasing fresh, organic product and veggie broth. If you don’t normally buy organic except on occasion, this is the time to do it.

To me, organic onions are so much sweeter and yummier than conventional (I used yellow, but white is okay too), and since they’re the star of the show I definitely splurged on them for this. Also try to get organic veggie stock, it really makes a difference!

Unlike a lot of my other recipes, this is not a quick meal to fix. Simple, yes, but it takes lots of patience. The onions alone take about 40 minutes to caramelize, and then it has to simmer with the rest of the ingredients for another good 20.

Be warned: cutting 2 pounds of onions is no fun for your eyes. I’ve heard you can light a flame or keep a piece of bread in your mouth to avoid crying while cutting them, but I was already covered in onions before I remembered. It’s worth the struggle though! 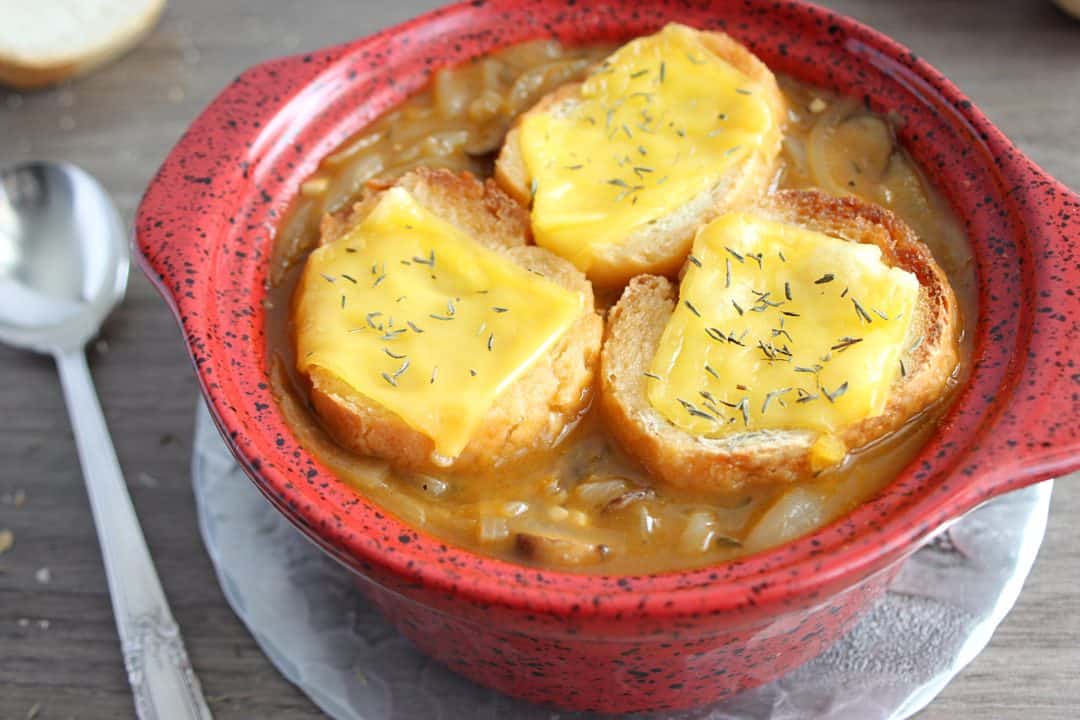 So about the cheese, yes vegan cheese exists, and no it’s not as scary as it sounds.

Well some of it actually is kind of scary, but there are a few brands who get it right!

I hardly use vegan cheese, but you just can’t have French onion soup without the appropriate topping: French bread with melty cheese.

Just a quick vegan cheese guide: I used Chao original vegan cheese, it actually tastes pretty good, but when you try to melt it, it changes color from white to yellow. Brands like Daiya or Follow Your Heart have options that do melt better, but the texture is a bit different, so you may want to try them before you commit to one for this soup! I was happy with the Chao flavor, just a bit disappointed in the color change. 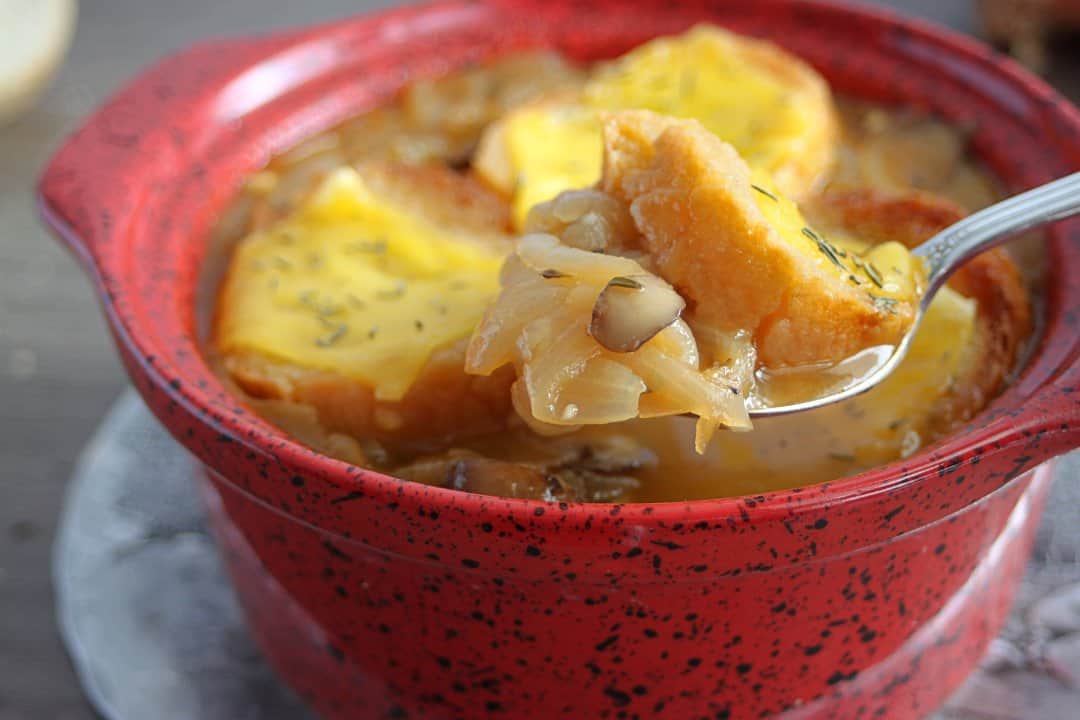 The caramelized onions, delicious veggie broth, herbs and mushrooms (which are optional by the way, I loved them as an addition to this soup), make this soup incredibly tasty and you won’t be able to get enough.

You have to give it a try! 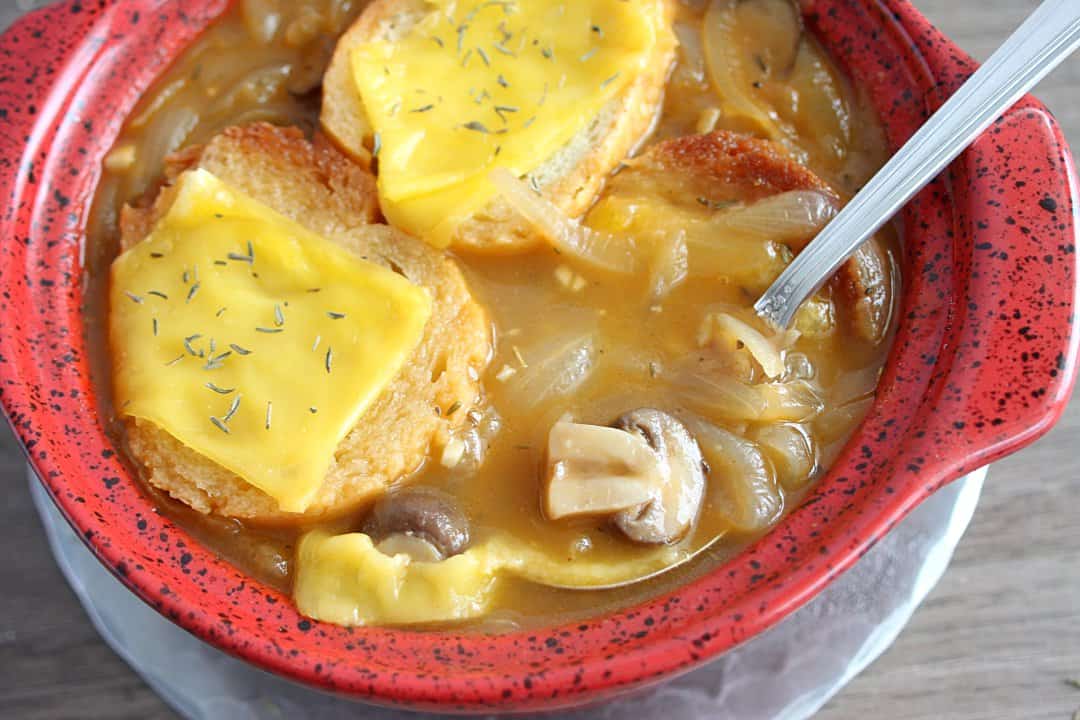 *I would recommend adding salt at the end as the saltiness can change drastically after cooking, and also depends on what brand of broth you use.

**Totally optional, but you can add a small drizzle of a neutral oil at this point. This recipe doesn't require it, but it can help speed up the browning process, and adds a bit of flavor as well.

Hi there! My name is Caitlin and I’m the creator behind plantwell. Here I share plant-based versions of all your favorite recipes, while also throwing in something new now and then. Click here to learn more!