I’ve always been a fan of the Cinnamon Dolce (Italian for “sweet”) Latte at Starbucks, but I always enjoy recipes with real ingredients instead of syrups.

The flavor is always more true and robust compared to flavored syrups.

This recipe is ready in no time and will save you tons by skipping a trip to the coffee shop!

There was a time I tried to wean off of coffee, but when I moved back to Chicago I figured there’s just no way, I love it too much and it keeps me warm! 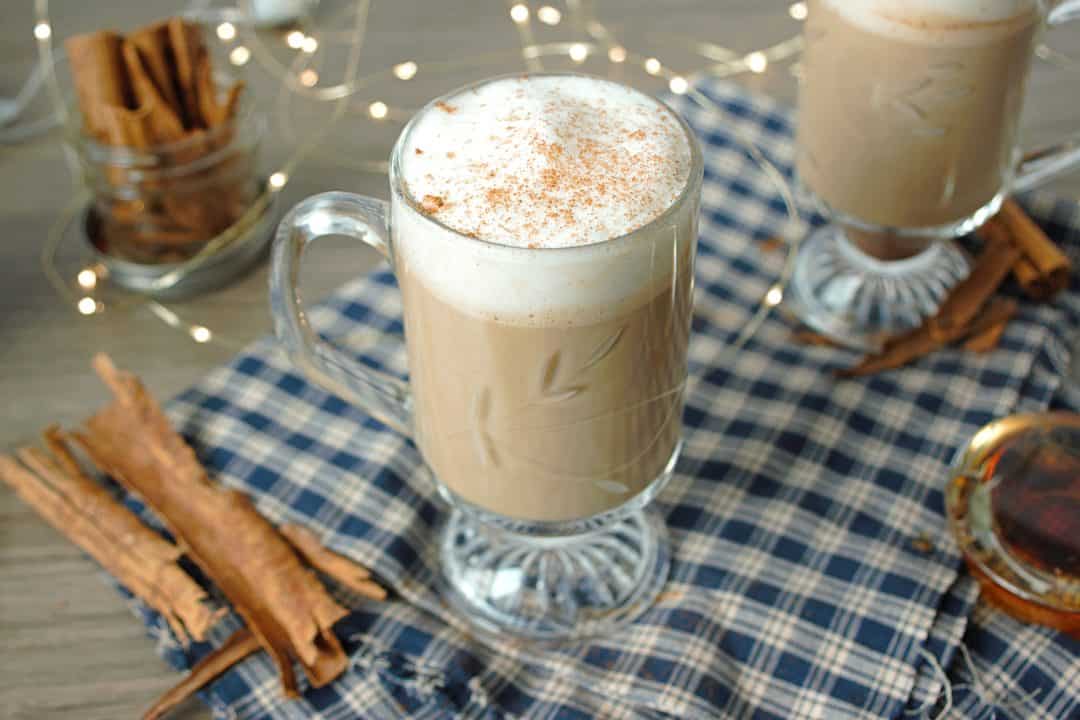 Cinnamon and coffee go together so well – coffee is already comforting, and adding cinnamon makes it that much more so.

I even love adding cinnamon to my normal black coffee grounds for an extra hint of flavor!

This recipe has all the comfort and flavor you want, and is made from whole, natural ingredients and foamy plant-based milk!

You can use strong coffee or espresso shots for this recipe, I usually opt for some coffee since it’s faster to make, but espresso has so much flavor, so it’s really your preference!

For all my homemade lattes, I love using a wand steamer.

I’ve found it’s the easiest way to make tons of foam with my plant based milks, and it’s very easy to use!

No latte is complete in my opinion without a good inch or so of foam on top, and these wands are so powerful you could even make cappuccinos! 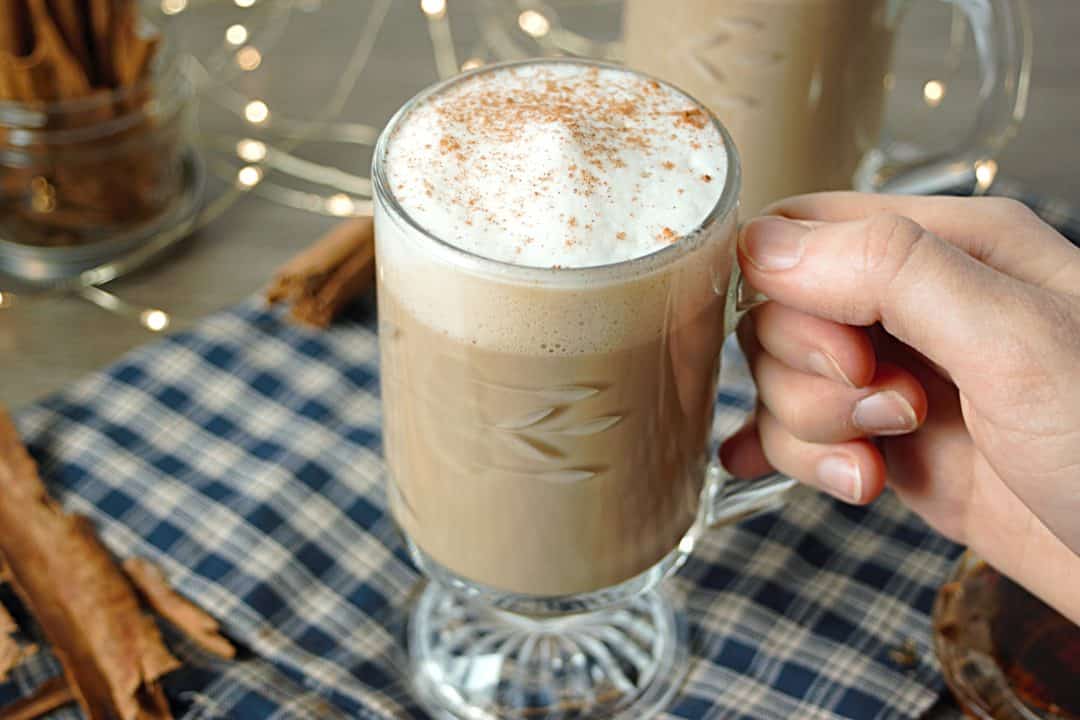 How to Make a Vegan Cinnamon Latte

I like to have every measured out before I make my lattes, it just makes everything go smoothly!

I just pour my ingredients into little containers and then brew my coffee last so it’s nice and hot.

The first step in making this vegan cinnamon latte is to stir together your freshly brewed coffee or espresso, maple syrup, vanilla and cinnamon well.

Next you’ll want to prepare your milk – heat up your milk in the microwave for 1 minute, and then place the tip of the steam wand beneath the surface of the milk, turn it on, and let it swirl, slowly pulling up as needed to keep the foam rising.

If you would like a video on how to do this, watch this link.

Once you have as much foam as you want, take out the wand and gently tap it on a flat surface to help the foam and liquid separate a bit.

Then take a large spoon and block the foam from coming out of the cup as you pour the milk into the coffee and flavorings.

Then just scoop out your foam and place it on top.

It may sound tricky if you haven’t done it before, but it’s super easy with some practice!

Top it off with a little sprinkle of cinnamon and that’s it!

The Best Ever Dairy Free Latte

I’ve really been enjoying making my own lattes from home.

It’s fast, easy and I can make them exactly how I like them, and as many as I want!

This cinnamon latte is the perfect way to start your day, and I highly recommend making one as soon as possible! 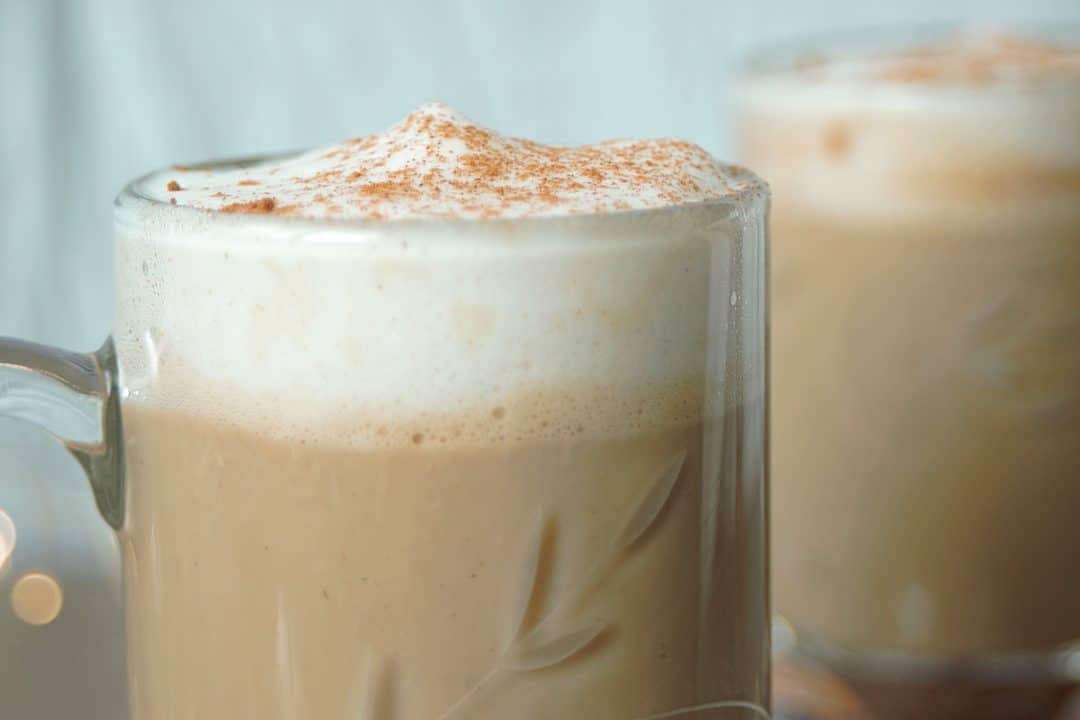 Try these other easy vegan recipes:

*If you don't have a steam wand, you can skip this part or use vegan whipped cream instead!

As an Amazon Associate and member of other affiliate programs, I earn from qualifying purchases.

Welcome! My name is Caitlin and here you will find my take on plant-based versions of all your favorite recipes, while also throwing in something new now and then. Click here to learn more!