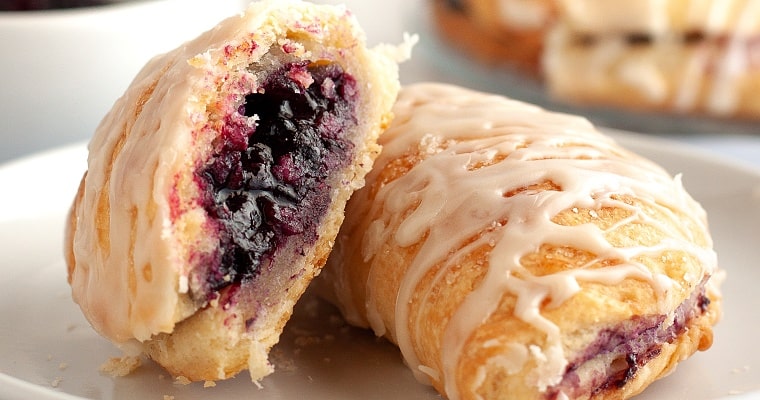 It’s the perfect dessert pie – for your hand!

They’re not overly sweet because it doesn’t need much added sugar thanks to the sweetness of the blueberries and the warm, buttery crust. 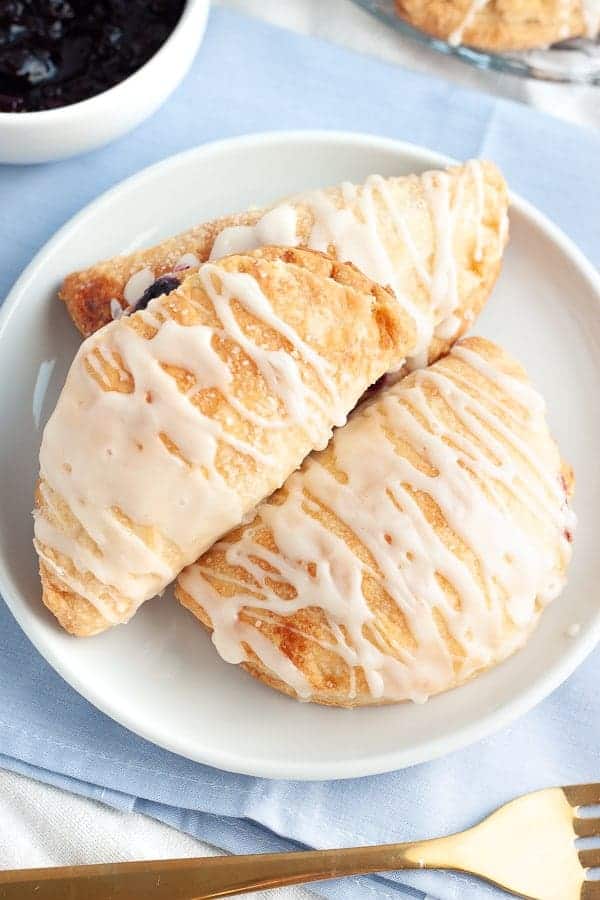 I used to not be a huge pie fan, I would always take cake over pie anyday – that is until I started making my own!

I think it’s the freshness of using real fruit and not over-complicating things with added sugars and weird ingredients. The more basic the better when it comes to these little pies.

These pies have a warm fruity center of lemon and blueberry flavor, surrounded by a perfectly crispy and buttery homemade dough, and it comes together in no time!

I’ve used store-bought vegan dough in recipes before, but if I have the time I ALWAYS try to make my own – it just makes it so much more special, and tastes much better. 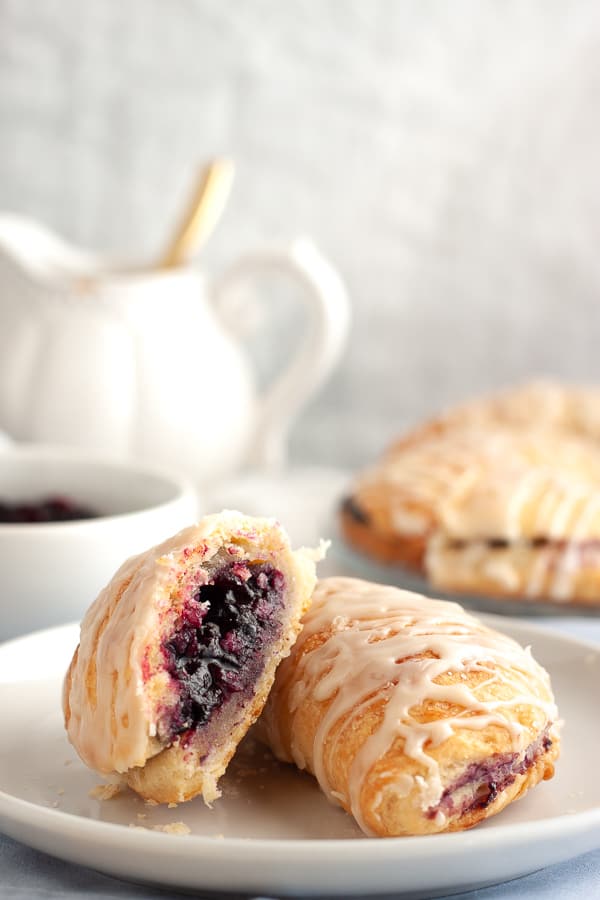 Your dough is going to need to chill for an hour (or at least 30 minutes if you’re in a hurry), so I recommend making it first to cut down on wait time.

To make it, simply mix your flour, sugar and salt in a bowl, toss in your chilled and cubed vegan butter and combine it by squishing everything together with your hands until crumbly.

You can also ‘cut’ it together using a pastry blender or two knives: if you want to try this version you can watch this video for an example – I prefer using my hands for this because I find it faster and just as efficient, but use whichever method you prefer!

Now, add 4-6 tablespoons of water, as needed, until the dough begins to come together. Work it with your hands until it forms a ball and then cut the dough in half, wrapping each and placing them the fridge for 30-60 minutes to chill. 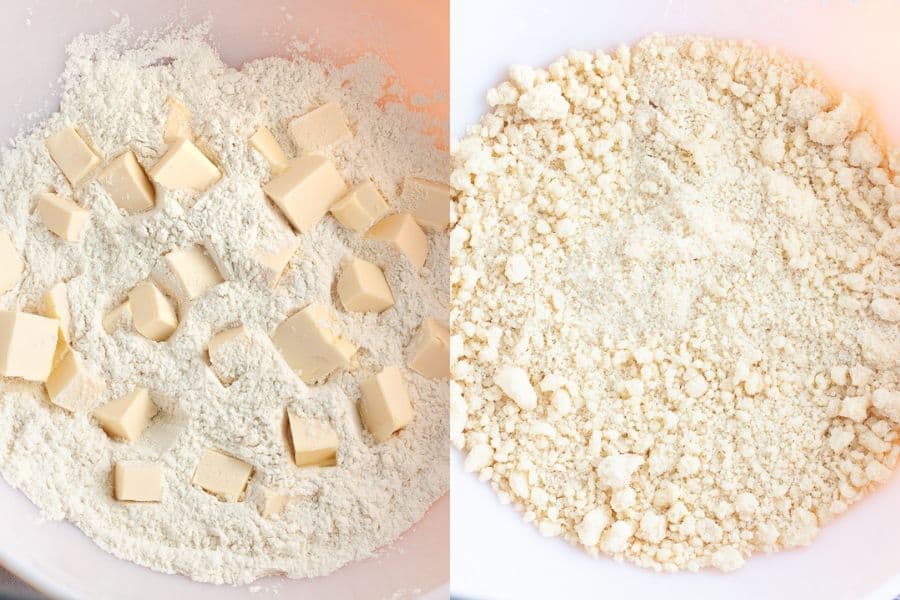 It’s important to cook down your blueberries well to remove some moisture and avoid a soggy pie.

To do this, simply cook your pint of fresh blueberries and 3-4 tablespoons of sugar over medium heat for about 10 minutes, or until it begins to thicken. Be sure to stir it often to avoid burning.

Then, add a tiny splash of water to your corn starch and stir it until dissolved. Add this, along with the lemon juice, to the blueberries and stir so the heat can help thicken everything even more (this should only take a minute or two).

Remove from the heat and allow to cool. 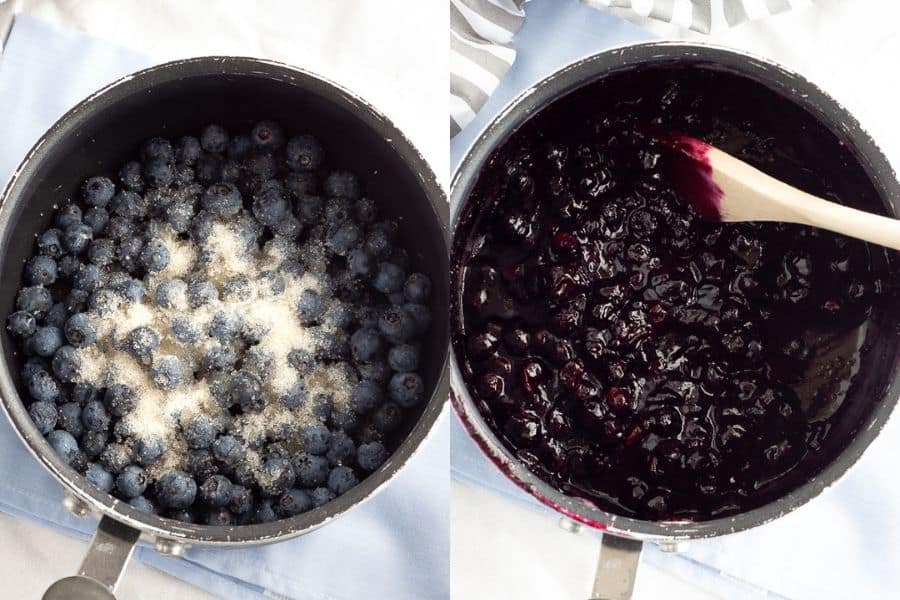 After your dough has chilled, unwrap one and place it down on a flat, floured surface and add more flour on top and to a rolling pin.

Roll it out until roughly 1/4 inch thick, and cut out 4 inch circles, placing them on a baking dish covered with parchment paper.

Repeat with remaining dough, forming leftover dough back into a ball and rolling it out again to get as many pies as possible! 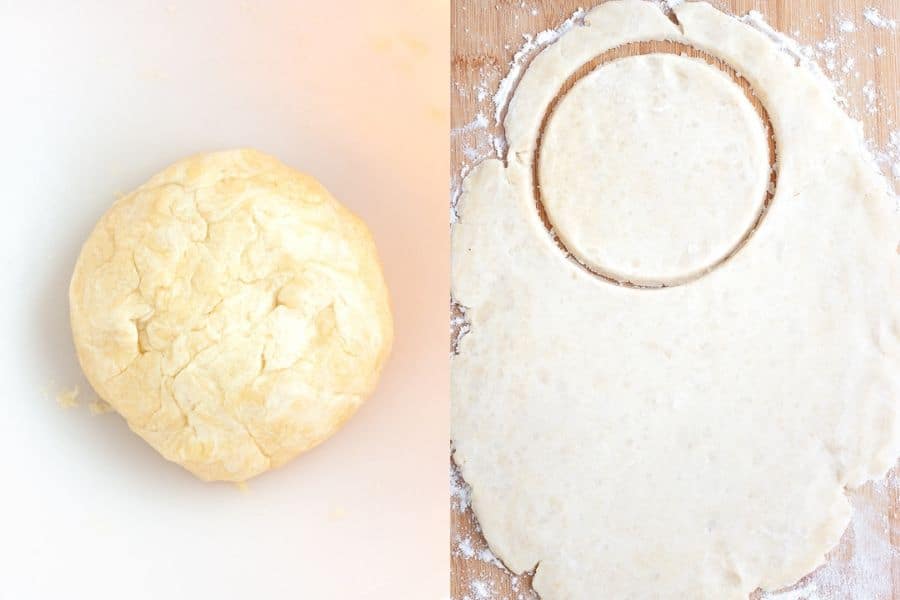 Preheat your oven to 400 degrees. Add 1-2 tablespoons of blueberry filling to the center of each pie, being careful not to overfill them. 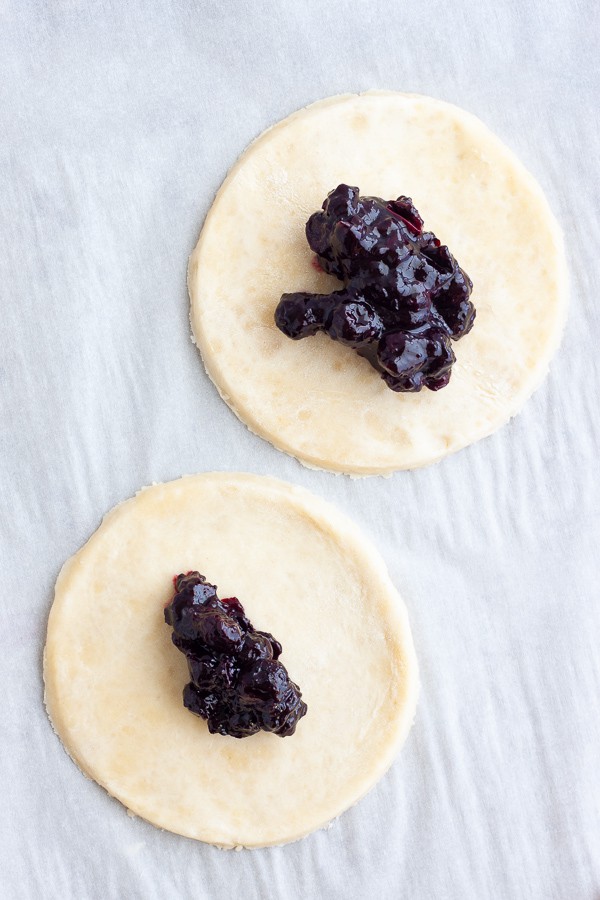 Add melted vegan butter along the edges of the pie and seal shut, then use the end of a butter knife to add indentations to the sealed edges for that classic pie look.

Brush your pies with a bit more vegan butter and lightly sprinkle with more cane sugar. 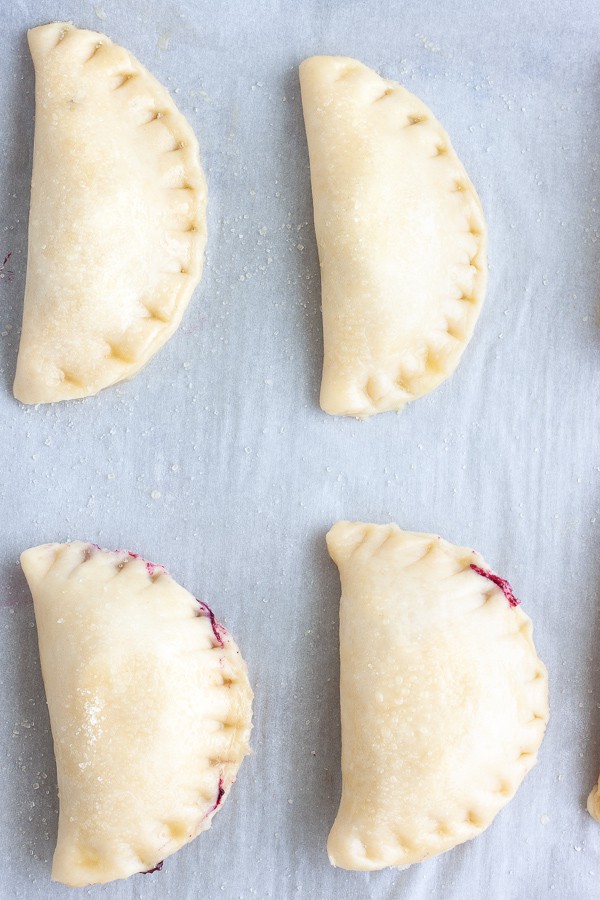 Bake for 20-24 minutes or until golden brown. If yours aren’t browning as much as you’d like you can broil them VERY shortly – just be sure to watch them constantly to make sure they don’t burn, it can literally burn them in seconds. 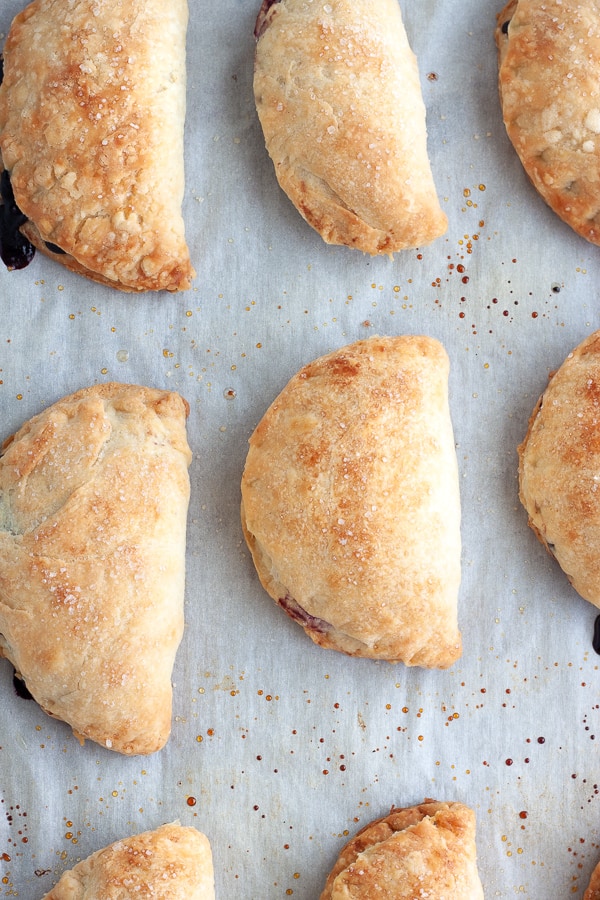 Once your pies have cooled, mix together your vegan powdered sugar, lemon juice and vanilla extract until runny, and drizzle over pies evenly.

This is a similar drizzle that I used for my Vegan Cinnamon Rolls, except I used lemon juice instead of plant milk for some added citrus flavor.

You’re done! Perfect little homemade hand pies that are just as delicious as they are cute. 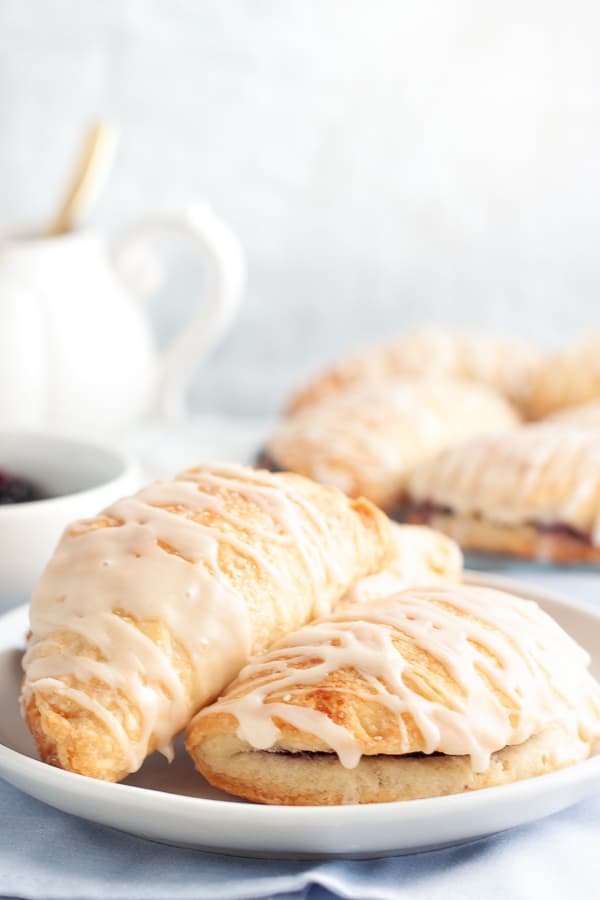 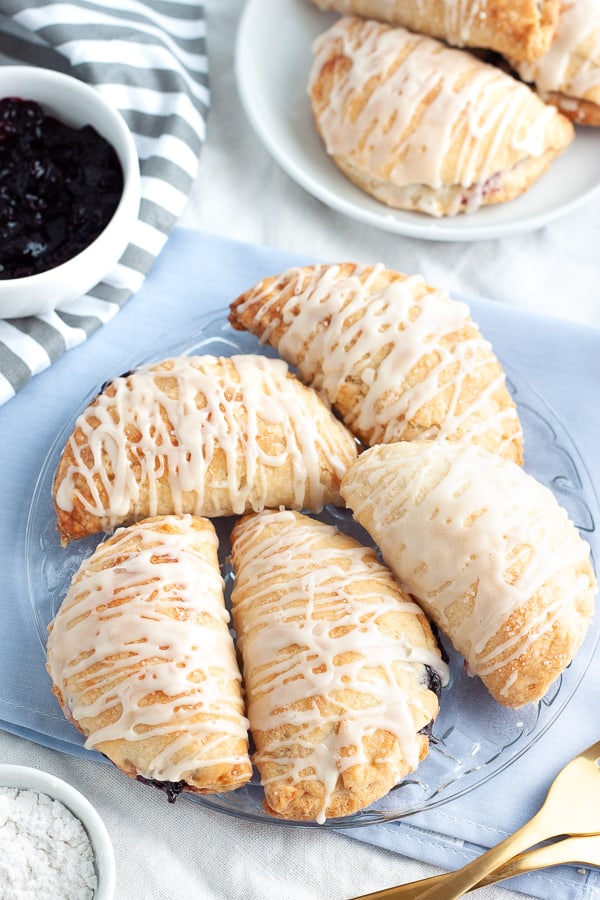 You can make these with any fruit you like – I love making this recipe all year long using seasonal produce to switch things up, try them with apples, strawberries or cherries! 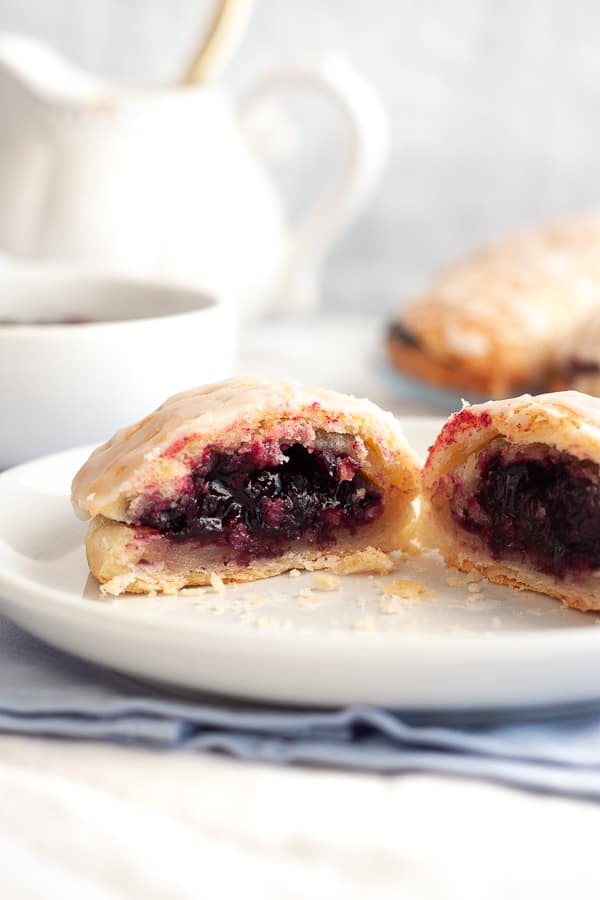 These vegan pies are:

Try my other vegan pie recipes: 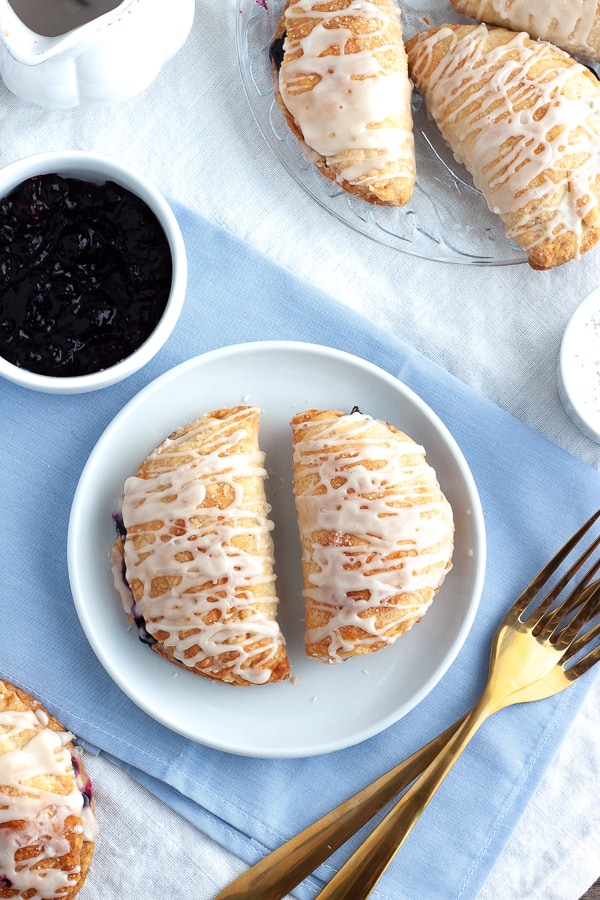 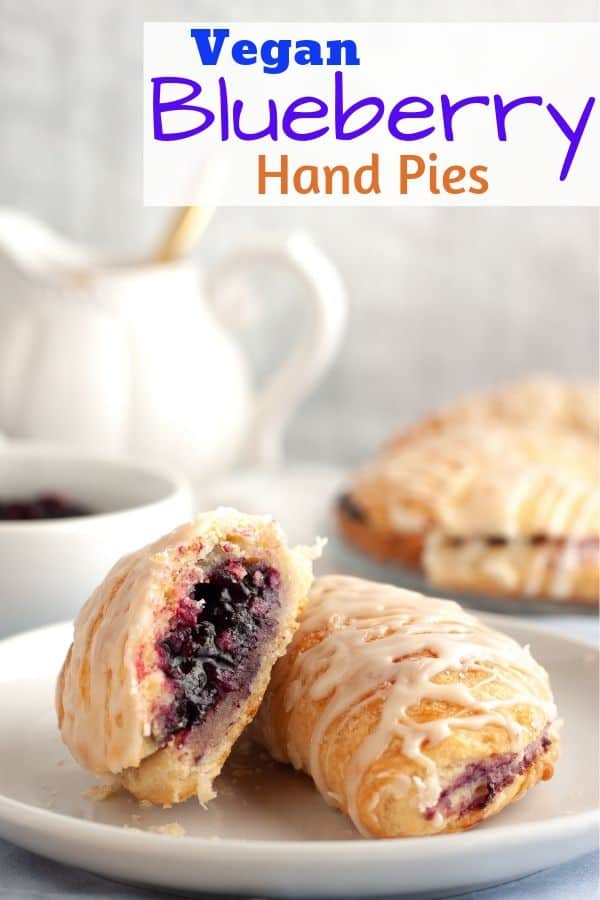 As an Amazon Associate and member of other affiliate programs, I earn from qualifying purchases.

Welcome to plant.well! Here you'll find plant-based versions of all your favorite recipes. Whether you're vegan or just looking to incorporate more plant-based meals in your diet, you'll love these simple recipes!